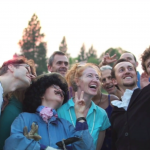 Food Forest Video Announcement: We’re very excited to share this new video of our food forest in its third year of life. The video features an introduction from Cara Conroy-Low, a look at some of the many plants that are thriving in the food forest and not to mention a […] Read more » 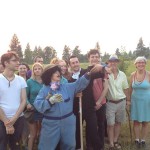 These photos were mostly taken during July and August 2015. It is the 10th Anniversary since Clear Sky retreat center was founded, and we have been celebrating!  The food forest is doing well, planted in 2013, it is now in its third season. Food Forest notes and observations There was […] Read more » 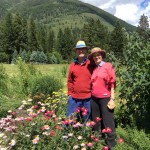 These photos were taken during the Canada Day long weekend.  There had been incredible growth in the food forest, both food forest plants and grass included.  The 3×3 foot landscape fabric squares around each tree offered good protection for individual trees.  We spent a lot of time weedwhacking, bushhog mowing […] Read more »